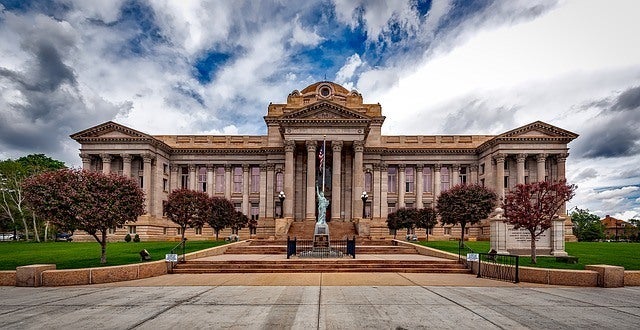 Question: What courts can Harmony Law practice in?

Answer: Mr. Hutchins is currently licensed and in good standing with the state bars of Wyoming, Colorado and Alaska. He has handled cases in the state and federal courts of those states.

Mr. Hutchins is currently authorized to practice in the following courts:

Most of Mr. Hutchins' cases are prosecuted in the state and federal trial courts of Wyoming and Colorado. However, he is able to appear in any court he is authorized to practice in, and may appear with special permission in other state and federal courts in the United States on a case-by-case basis through a process called "pro hac vice."

Mr. Hutchins can also represent you in arbitration and administrative or agency matters, including the Trademark Trial and Appeal Board.

Question: I need to file a lawsuit (or answer to a lawsuit) immediately. Can Harmony Law take my case?

Answer: That depends. If you need to file a lawsuit or if you are served with a summons and complaint, do not delay. Contact an attorney immediately because attorneys do need time to review the file, become apprised of the situation, interview the client and prepare the court documents. It usually cannot be done overnight.

Question: How long till we go to trial?

Answer: A common problem with most court systems today is that they are over capacity. There are a few courts that have relatively quick calendars, but those are the exceptions to the rule. If you file suit, please do not expect a quick resolution. It can take many months to go trial, and if your case is complex, it can even take longer. Colorado state courts are usually quicker than Wyoming state courts, with federal courts somewhere in between. With that said, there are times that the parties will seek a quick resolution through a negotiated settlement and resolve the matter in just a few months.

Question: I saw a news report which referred to a case getting dismissed. How does that happen?

Answer: When a case is dismissed it means that the judge closed the case. Court cases can be dismissed for a variety of reasons. There are two common reasons for dismissing cases. First, some cases have no real legal reason for the case. When that is brought to the court's attention, the case can be dismissed.

Another way that cases are dismissed is through a motion for summary judgment. In this type of dismissal, it is clear that the plaintiff does not have any facts to support the lawsuit. Rather than make the parties go to trial on a case for which one of the parties has no evidence to establish his claims, the court dismisses the case.

Question: What can I do to prepare myself for a civil lawsuit?